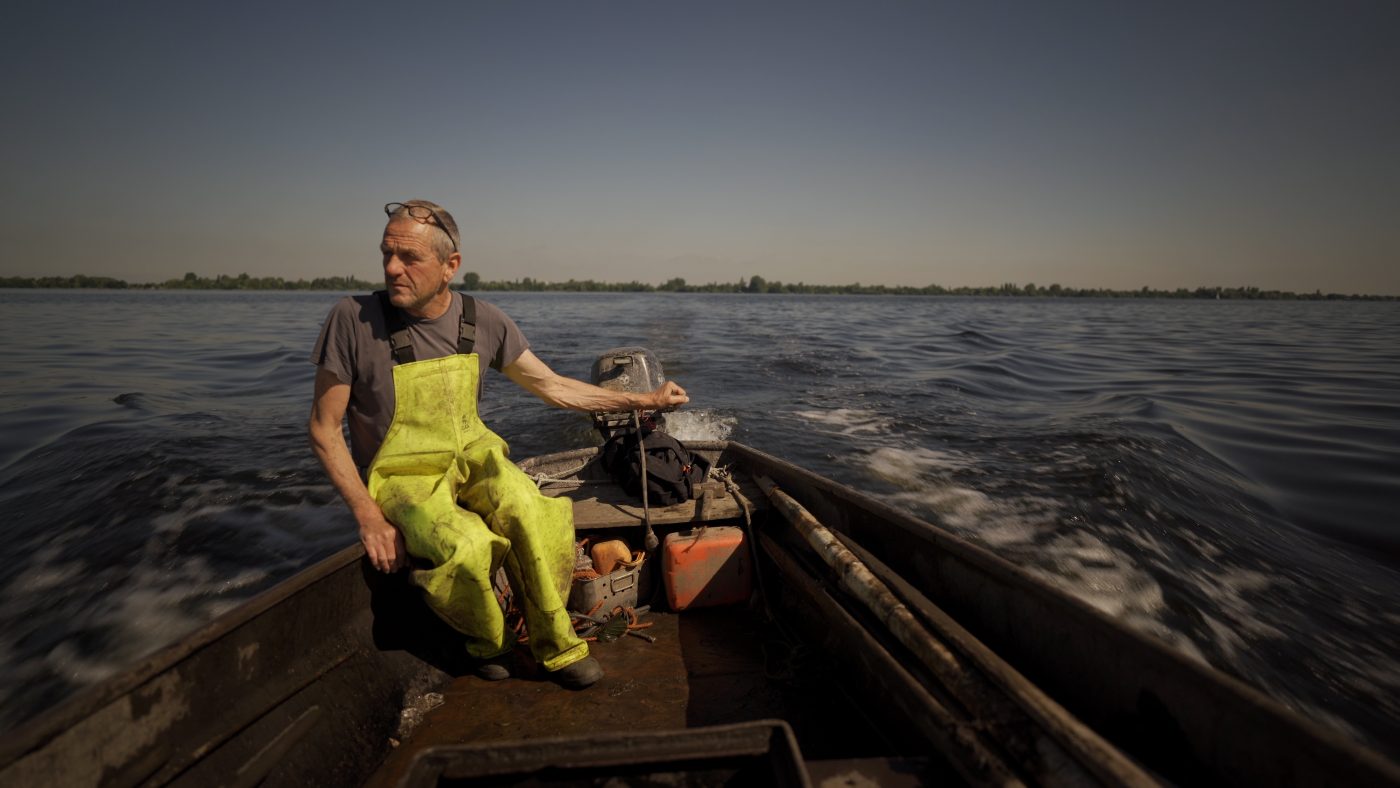 The City Beyond The Human

Pre-publication of Darko Lagunas‘ text for Designing Cities for All, a publication by Pakhuis de Zwijger, November 2022

The City Beyond The Human

When designing cities, non-human inhabitants are often overlooked. But the structures we put in place, whether spatial or systemic, affect them extensively. Darko Lagunas puts forward the case of the eel. What can we learn from the eel, and what do they tell us about who we might become?

There is a mysterious creature roaming the waters of Amsterdam. Below the surface, it slithers and crawls through the murky canals. It is not from this place, yet it was around long before humans ever set foot on Dutch shores. Every slippery individual travels over six thousand kilometres to get here, where it once found paradise. Endless wetlands, muddy streams and free flowing rivers. Now, it finds deafening underwater sound, heavy pollutants and strange angular structures that are often impossible to overcome.

This is a story about Anguilla anguilla: the eel, a.k.a. ‘smoked eel’ or nagi kabayaki (eel sushi). Humans wouldn’t live up to their predatory reputation if they would not know it best for its good taste. The secrets of this unassuming and slippery creature, however, tormented the minds of Aristotle and Freud. Eels are more than just a commodity for human consumption. Looking closely at what they are and what we are to them can tell us something.

As the anthropologist Eduardo Kohn would say: it can tell us something about how that which lies ‘beyond’ the human also sustains us and makes us the beings we are, and those we might become.[1]

Eels go through several transformations throughout their lifetime. In order to sexually mature, they need brackish and sweet waters like the murky wetlands surrounding Amsterdam. They arrive here in the form of little glass eels up to 8 cm long and transform from glass eels to elver and eventually to yellow eels (60 to 100 cm).

Entering their wetland territories around Amsterdam has become virtually impossible because of human interference. After their journey halfway around the world, the baby glass eels find themselves stumbling upon immense barriers that are practically insurmountable. We call it ‘coastal protection’ or ‘green energy’. Dykes, dams, water pumping stations and hydropower: the antagonists of free flowing rivers. Ever since superstructures like the Afsluitdijk were constructed, eel populations have dropped roughly 99 percent.

Yellow eels can remain in these waters from five up to eighty years. Eventually, something remarkable happens: their yellowish skin turns grey and their eyes become larger. They stop eating and the urge for salty waters grows. They produce sexual organs which they did not have up to this point, replacing their digestive system. On the accumulated fat reserves they’ve built up to that point, they begin their last journey back to the Sargasso Sea. Back to the depths where they reproduce to never return.

Interestingly, scientists have never observed spawning eels. We know it’s a once in a lifetime event for eels and that their offspring come from the Sargasso sea. But how eels have sex remains a mystery. For centuries, Western thinkers have been obsessed with this issue, also known as the ‘Eel Question’. Where do they come from and how do they reproduce? Even today, while the urge for growth and expansion is driving humans to colonise Mars, it remains a mystery how eels have sex. What does this tell us?

Western thinkers are inclined to ask particular kinds of questions. Questions that are founded in a world view that sees the world in terms of hard oppositions and hierarchy. Mind over body, culture over nature, male over female, white over black. The oppositions that these Cartesian dualisms create are increasingly criticised for their fundamental flaws.

Here, what eels are can tell us something. Eels are non-binary for the largest part of their lives – neither male nor female. Their gender is eventually determined by environmental factors, such as population density and hormones in the water. This frustrated the obsession by Western researchers for millennia, trying to find either male or female genitals in eels. What eels are tells us that what we know (scientifically) is conditioned by norms – in this case, hetero-cis-normativity. It tells us that science needed more than just human scientists to unravel the mysteries of the eel.

Additionally, the motivations of Western thinkers to study eels were and still are extremely normative. There is a high correlation between places where we consume eels and places where we study them. This suggests that research is driven by the commercial interests of eels as a food commodity and tells us something about why we know what we know.

Both (commercial) normativity (why we know) and dualist thinking (how we know) are fundamental biases that flaw Western scientific thinking and philosophy in general. Looking closely at eels tells us that how we know and what we know are often based on biased research questions. What does this tell us about what and how we know when we study ourselves as humans? An eely question…

The eel’s right to the city

Dams and dykes are physical representations of dualist oppositions, produced by scientific thinking, for example between domesticated polders and the wild sea, or ‘city’ and ‘nature’. But despite the locks and dams that separate the North Sea from inland water bodies, Amsterdam remains a city where fresh- and saltwater meet. The landscape has been transformed immensely from the biodiverse wetlands it once boasted, but it remains a unique ecosystem.

In this ecosystem, the eels play an important role. They are top-rank predators in these waters and help regulate populations of other animals. Also, they are a significant source of food for other fish, mammals and birds. Moreover, they transport freshwater mussels, which filter polluted waters. Without eels, mussels have a hard time to get around, which means dirtier and more polluted waters. This way, eels maintain housekeeping in the canals, rivers and lakes surrounding Amsterdam.

Their existence beyond the city –  and all webs of life they depend on from the Atlantic Ocean to European waters  – also sustains the city, and makes the city what it is: the household of the eel. However, their household is hardly accessible and mostly occupied by human activity. Following David Harvey’s interpretation of the right to the city: “Rights to the city are far more than just having access to the city. It is also about having the right to change or remake the city according to one’s needs and desires.” The eels’ right to the city is about them having access to their waters, but also about making those waters desirable for eels.

Designing cities beyond the human

But what are the desires of eels? What do eels want? Do eels have a will at all? Purely biological and ecological scientific perspectives – based on sanitised, detached measurements of isolated variables – fall short in answering these kinds of questions. If we want to inclusively design cities beyond purely human interests, we need to try and answer these questions. For this, we need methods which encompass uncertainty, ambiguity and the messiness of everyday life. And which legitimise embodied knowledge, grounded in bodily experience and obtained through long-term multisensory observations, as a valuable source of knowledge.

One example of such a method is the ethnographic fieldwork I conduct in my research. In this method, the goal is to get as close as possible to the world of those I study. Getting close to the eel means not only reading and talking about eels with ecologists or biologists. It is also about embodiment, multisensory experience and exploring the multiplicity of narratives surrounding the eels’ existence.

So I talk with people with all kinds of knowledge about eels. This diversity of people becomes the interpreters – in this case of eels – in my research, which results in short films. Together, we go into the field, as close to the eels as possible: diving, snorkelling or fishing while conversing about them.

One example is Theo Rekelhof. The only eel fisher of the Westeinderplassen near Amsterdam, he manages this body of water, continually checking in on and balancing out how many eels the water can offer. Each caught eel too many is one less eel for tomorrow. He voices the thin line between predator and prey, while simultaneously taking care of both.

Another example is the work of artists Sheng-Wen Lo and Yi-Fei Chen, who created a space that was specifically not designed for humans. Intrigued by eels’ lives and their encountered hindrances, they felt the need to design something that resembled an obstacle course meeting an escape room: a series of interactive contraptions which translated the obstacles experienced by eels (such as barriers, contaminated water bodies and illegal poaching) into human terms. In this F/EEL installation, participants could feel what it is like to be an eel in a world occupied by humans. Sheng-Wen Lo elaborates: “Although one would never succeed in fully reconfiguring the eels’ subjective experiences into that of humans, attempting with best effort, unlike not trying at all, opens up possibilities for us to imagine, question and discuss.”

Landscape architect Thijs de Zeeuw’s project Palingpark is an example of urban design that goes beyond merely human interests. He critically confronts the idea that urban space is just for humans by sinking structures to the bottom of Amsterdam’s Oosterdok behind the Arcam architectural centre, aimed to reclaim a safe space where young eels and other fish can find shelter. This Palingpark consists of  six ‘cube houses’: steel cages with varying mesh sizes which offer different sized animals shelter against larger predators. They replace the absent water vegetation.

After the cages are placed he uses a variety of instruments – like hydrophones and sonar –  for a so-called dialogue, to observe what happens under the water’s surface. How desirable are these cages for eels? A mere two months into the project, it became clear that the cages were well used by different types of fish and starting to be overgrown by weeds. A participatory process designing the city beyond the human…

The stories of eels and people are not so different. When we eat eels, we also eat the accumulated toxins in their fats that result from microplastics and chemicals in the water. Environmental destruction threatens the existence of us both.

The interconnectedness of eels with bodies of water from the Sargasso Sea to fresh waters in Europe is a testament to the fact that what happens locally can drive eels into extinction everywhere. This matters, not just for eels but also for humans and the city, as that which lies beyond the city, also sustains it and makes the city what it is.

Whether we accomplish creating cities where many worlds fit in – like those of eels and others – will tell us something about what kind of humans we are. Will we pursue the invasive legacy of making territories inaccessible and undesirable for others? Expelling them, either by pulling up hard borders in the form of dams, dykes, walls and fences or by categorisations in the mind? Or is it possible to have eels and others around – to follow their lead and let them teach us who we might become?

* This text was made possible in part by the Amsterdams Fonds voor de Kunsten.

** The short film Anguilla anguilla iss part of an exhibition in the Openbare Bibliotheek Amsterdam in October 2022.